Per the Perspectives Ideation

I was thinking about your brainstorming for the "perspectives" topic from NUMU and then I was leafing through a book from the de Young (a great museum in the city if you've never been) and I saw the below painting from Aaron Douglas. 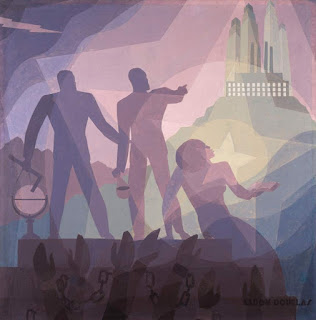 I'd never heard of him before, and I quite like this painting. I enjoy how the composition is dynamic in its use of scale and color, and then I noticed the shapes that radiate out from the seated figure. Those are cool.
This may not be the ideal way for you to show off your painting skills for a large project like this since there is, essentially, no modeling of form, but the idea works quite well. Especially if you take the time to read the snippet from the book you'll see how there is a lot more going on in this image than meets the eye.


On p. 95, the following is said about the above piece (titled, Aspiration)
"During the 1920's, African Americans created a thriving culture of jazz, theater, literature, and visual art in New York/s Harlem district. Known as the Harlem Renaissance, this artistic explosion fostered a cultural community of people who set about celebrating the opportunities of modern urban life in a language that drew inspiration from their common heritages as people of African descent. Aspiration is one section of a four-part mural cycle that Douglas created for "Hall of Negro Life" at the 1936 Texas Centennial Exposition in Dallas. The cycle reflects the optimism among African Americans that lingered well after the halcyon days of the Harlem Renaissance. In this mural Douglas organizes his visual image of African heritage according to a highly rationalized, didactic scheme: the shackled hands reach up in a gesture that links them with the experience of slavery, while the monumental figures represent the transformation from forced labor to a community of modern workers inspired by leaders trained in literature, science, and engineering, as symbolized by the book, beaker, globe, and compass and right angle. As a further celebration of African heritage, Douglas uses and Egyptian inspired figure and the pictorial conventions of Egyptian representation, which combine frontal and profile images. In this way he unites the flattened, abstract language of avant-garde modernism with the visual vocabulary linked to ancient Egypt and, therefor, African origins." 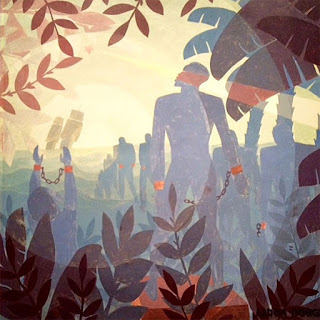 I want you to push how you think with your thumbnails and think about ideas and feelings and perceptions that you could convey. Even if you know you are doing a master oil copy, this is a good process to go through. Besides, it will help you think of ideas for Independent Practice and daily sketchbook pieces as we go through the year as well.